Home Página Inicial | News & Events | Brown is the New Green for Gardens: Lessons from the Drought in the U.S. 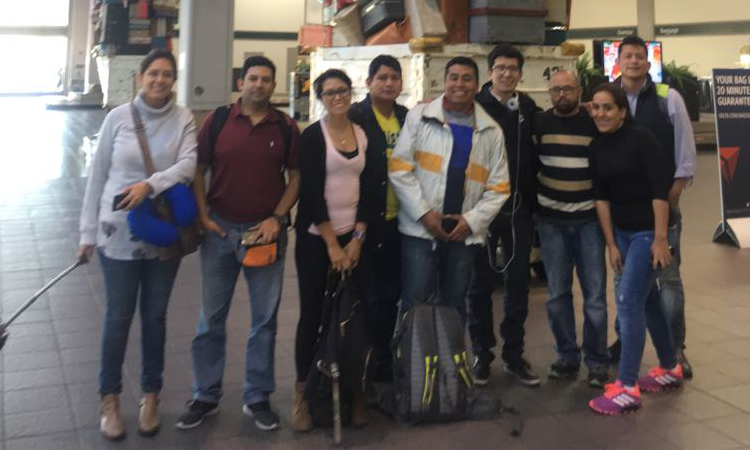 Water for human consumption is such a scarce resource, as it is in Bolivia, that California authorities took radical measures to alleviate the crisis.

Trying to change in peoples’ minds about gardens having to be green seems crazy, but that is precisely what is happening in the United States as keeping gardens green costs millions of liters of water, which could be used instead to lessen the crisis caused by scarce drinking water.

Sacramento, the capital of the state of California, faced a historic drought from 2013 to 2015 that almost left 37 million residents of the most productive valley in the country, without drinking water. Today, authorities remain alert about the water sources in the state.

Snowfall in the heights of California can no longer guarantee to provide water because the increase in temperature on the planet is causing warmer nights and this prevents snow from freezing, leading to faster water evaporation.

Until recently, Sacramento also depended on groundwater for its drinking water supply, but recent studies have determined that the extraction of groundwater is creating a more serious problem: the reduction of water pockets and the erosion of soils due to insufficient recharge of aquifers.

What to do in this situation? Scientists turned their sights to the sea and are already developing experiments to desalinate ocean water to make it drinkable and supply it to homes. Also, experts took emergency measures to reduce consumption of water, which is decreasing little by little.

Sacramento, CA has an average temperature of 20 degrees Celsius. In winter, there are rains and snowfalls that feed dams built in the foothills of the mountains. Unfortunately, during the drought, water reserves in those dams diminished to one half of their capacity.

Folsom Lake, another significant water source, was on the brink of becoming a desert due to the lowered water levels. Photographs taken before and after the climatic event in California, exemplify the magnitude of the drought and prompted three lines of action: regulation, education, and alternatives.

The U.S. Constitution is succinct and does not abound in declarative wording as the Bolivian Constitution, which provides that access to water is a “most fundamental right”. Federal and regional authorities understand that water issues are a matter of life and death with no political colors. They also understood that solutions to the crisis could not be postponed.

In the face of the crisis, water authorities took some measures that perhaps would have generated demonstrations and protests if applied in Bolivia.

The gardens that used to adorn houses and streets in Sacramento were “sentenced to death” because they required too much water to keep their green appearance. An intense and sustained media and social network campaign was implemented with the slogan “Let it go,” meaning that gardens should not be irrigated in order to save water.

The communication strategy stressed that it was necessary to accept and even embrace the “change in color” of all gardens. People, for as long as they could remember, believed that gardens ought to be green, but in times of scarce drinking water, the new paradigm had to change; “brown is the new standard color for gardens.”

All associations that distribute drinking water in Sacramento and other cities in California, including the Association of California Water Agencies (ACWA) developed an intensive media campaign that involved personalities such as Lady Gaga and former Governor of California Arnold Schwarzenegger.

According to campaign managers, the key to the success in changing a longstanding paradigm that helped save millions of cubic meters of water simply consisted in telling the truth about the magnitude of the crisis. At no time were users kept in the dark about the situation of the dams. Also, the awareness campaign did not slow down when the worst part the drought was over because the danger of water scarcity is latent and will remain so until who knows when.

Currently, in all of Sacramento public gardens you can see thick sand, tree leaves, and dry grass. Hundreds of trees remain green but they receive no irrigation as they take water from the ground by means of their very long roots.

The crisis affecting California, especially Sacramento, was unprecedented. Unlike other natural phenomena such as tornadoes or storms, which can be predicted, or expected, droughts neither warn before hitting nor tell when they will end. The United States has cutting-edge technology to predict weather events, including all sorts of high-tech sensors and devices, drones, and even NASA satellites. Those tools could not predict the droughts that hit the region in 2013, 2014, and again in 2015.

Water supply in the United States is linked to a complex administration process involving the federal government, states, counties, and private companies. All levels of government and institutions work together seeking to operate in harmony to ensure provision of high quality drinking water which can be used right from the faucet, without further treatment.

Water authorities and companies are now focused on further reducing water misuse and recharging aquifers because groundwater could be used at any moment to supply safe water for human consumption. Also, they are making greater efforts to treat wastewater for agriculture and industry because they know the crisis of water scarcity might be irreversible. They believe that although past mistakes cannot be corrected, current policies can be reoriented and improved.

Overexploitation of water resources also affected the fauna and flora in the region. A vital species fighting for survival is salmon because they require cold waters to reproduce. As water temperature has increased in the rivers due the construction of dams, their very existence is jeopardized. California environmental authorities are working hard to save the species.

Página Siete was in Sacramento, CA last week, participating in an educational watershed management program sponsored by the U.S. Department of State that offered hands-on information to officers of central and sub-national governments that supervise management of water resources.

Recycling for others to drink clean water

In Sacramento, wastewater is not discharged directly into a river, as it occurs in La Paz. The Sacramento Regional County Sanitation District, one of the entities that manage water treatment plants, performs water treatment in three phases before it is released into Sacramento River.

The first phase consists in the removal of all solids: 75 tons of solid wastes are removed in a day. Then, ammonia, arsenic, uranium and other chemical components found in wastewaters are removed, and finally water is purified with advanced biological techniques before it is returned to the river as that water will also be used for consumption in other cities south of Sacramento.

Communities in this region of the United States cannot afford to simply dispose of wastewater because there are no other sources of supply except for snow and some lakes. Therefore, the liquids that leave the homes are collected in a modern treatment plant that works in a closed infrastructure that does not release bad odors.

Treatment of wastewater must meet very high quality standards before it is discharged into the river, where there is fishing and other economic and leisure activities.

During the drought, the plant that operates in the urban area of Sacramento, offered recycled water for gardens and industrial uses. Dispensers were installed so that companies and families could take recycled water for their activities. Currently, a large portion of this recycled water is used for agriculture.

Additionally, the mineral-rich solid waste separated from the liquids is used for fertilizers following a rigorous quality check system.