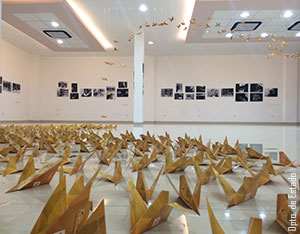 Embassy La Paz teamed up with the Centro Boliviano Americano (CBA) in Santa Cruz to sponsor a one month photo exhibit on child labor.     The exhibit was designed and implemented by NGO Fundación Desarrollo y Autogestión (DyA), a Department of Labor funding recipient for anti-child labor projects, and it will remain on display for the remainder of the month in the Santa Cruz CBA.  The exhibit has also been displayed in La Paz and El Alto.  Embassy Officers attended the Santa Cruz launch where more than 100 members of the Santa Cruz community were present along with representation from the Embassy of Ecuador (another co-sponsor), the Departmental Government of Santa Cruz, and beneficiaries of DyA’s child labor eradication programs.  Hundreds of CBA students will pass through the exhibit space over the next several weeks.