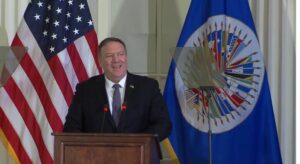 SECRETARY POMPEO:  Thank you.  Good morning, everyone.  I want to thank the Permanent Council Chair from Guyana for honoring the United States request to speak today.  And I’d also like to recognize the OAS’s superb Secretary General, Luis Almagro, for your excellent leadership in support of democratic values.  I want to extend my regards, too, to Assistant Secretary General Nestor Mendez, as well.  Good to see you this morning.  And I further want to thank our ambassador, Carlos Trujillo, for all the good work that you’ve done here leading the American mission at the OAS with great vision and with great energy and vigor.  Thank you for that.

I’m reminded as I stand in front of this beautiful array of people and in this gorgeous place – I’m reminded that it was an American secretary of state, a man named James Blaine, who first advocated for a closer union of the American states in the late 19th century.  It was his vision that would become this institution, the OAS, in 1948.

It’s been an incredible privilege as America’s 70th Secretary of State to carry on my predecessor’s legacy.  Almost exactly one year ago, I spoke inside this same magnificent building.  It was a dreary, rainy day.  But this place sits in view of some of America’s greatest monuments to liberty.  They were all bright with the glow of freedom even in the gloomy day around them.

The United States had, the day before, recognized Juan Guaidó as the interim president of Venezuela.  Thirteen other OAS nations had done the same.  I was proud to urge every one of your countries to join us in that.

Throughout this past year, the OAS has been a vanguard for helping the Venezuelan people, they who are so downtrodden and starving because of Maduro’s cruelty.

In only three months – very fast by diplomatic standards – we sat a new representative from Venezuela to the OAS, Ambassador Tarre.

We have helped bolster Juan Guaidó’s legitimacy in the international community, despite Maduro’s best efforts to undermine him.

We revived the Rio Treaty, which led to increased travel restriction on Maduro and dozens of other officials.  And you all should know that more actions will be coming.

Maduro certainly knows that we mean business.  It’s why he sought to withdraw Venezuela from this institution, the OAS.  We welcomed Venezuela’s new representative before he got the chance to do so.

We mean what we say in that charter that my – the previous speakers referred to.  The OAS Charter says as follows, quote:  “Representative democracy is an indispensable condition for the stability, peace, and development of the region.”  End of quote.

This is multilateralism, nations coming together in a way that truly does work.

These have been landmark actions, and in taking these actions we’re returning to the spirit the OAS showed in the 1950s and 1960s.  We sent election monitors to Costa Rica in 1962.  Two years later, we imposed sanctions on Cuba for attempting to overthrow the democratically elected Government of Venezuela by force.

But sadly, the OAS drifted in the 1970s and 1980s.  Military dictatorships in our hemisphere colluded to prevent concerted action to support freedom.  Some Latin American countries were still in the thrall to leftist ideas that produced repression for their own kind at home and stagnation in this building.  And even in the early part of this century, with the OAS, many nations were more concerned with building consensus with authoritarians than actually solving problems.

But the good news is – and I’m so proud of what you all have accomplished – that’s all changed.  Yes, we enjoyed a resurgence of the democratic values in the ‘90s.  But these days – more than ever – our values drive actions that support a hemisphere of freedom.

As I said in Santiago last year, in 2019, people of the Americas have brought a new wave of freedom, freedom-minded governments all throughout our hemisphere.  Only – only in Cuba and Nicaragua and Venezuela do we face stains of tyranny on a great canvas of freedom in our hemisphere.

Look at the work that we have all done together.  We have rejected despotism this year, besides what we’ve done in Venezuela.

In Nicaragua, the Permanent Council named a Commission of Member States that has investigated the Ortega regime’s killing of hundreds and made clear recommendations for the future of that country.

More recently, the OAS honored the former Bolivian government’s request to conduct an audit of the disputed election results.  The probe conducted uncovered proof of massive and systemic fraud.  It helped end the violence that had broken out over the election dispute.  It helped the Bolivian Congress unanimously establish a date and conditions for a new election.  And it honored – importantly, it honored the Bolivian people’s courageous demand for a free and fair election, and for democracy.

These actions didn’t happen within the OAS by accident.  It took hard work.  They happened because the member states – you all – decided to use the organization to get results.  All of us, together.

They happened because we have a leader for our times as well.  Secretary Almagro is fearless in guarding against authoritarian regimes.  He believes in multilateralism that holds people accountable, that puts new ideas on the table, and forces countries to take a position.

He restored the OAS financial health too – building the reserve fund and strengthening internal financial controls.  This is crucial to making the OAS effective in promoting prosperity throughout the region.

Just a handful of years ago, the U.S. Congress – not far from where we all are right now – the U.S. Congress openly entertained slashing funding for the OAS.  Now Congress, America’s Congress, is more eager than ever to support what we’re doing together, because his leadership values capture the bipartisan values of freedom and of democracy.  And the good financial management here too gives confidence that OAS progress will be effective, cost-effective, and transparent.

Secretary Almagro is worthy of our respect and our admiration.  The heroes in the Hall of the Americas would be proud of what he’s done.  He is a true champion for freedom throughout our entire hemisphere.

And his example isn’t just for those of us in the room.  I think other leaders and other organizations – from the UN, to ASEAN, to NATO – should take note of how this institution has been run by the Secretary General – and this body has been crafted – how multilateralism that works has permeated what we all do together.

It’s energetic, it’s effective, it says – it says enterprise work must achieve real results, not just process; resolutions whose words aren’t worth whims, but are truly a basis for joint and collective action; and institutions that take votes that are responsive to the most important issues, not exercises in finding the lowest common denominator amongst us.

Now, I know, Secretary General, that you have seven children, so you’ve had a lot of practice building chaos – building from chaos and bringing order.  But all jokes aside, this is what multilateralism ought to be.  This is what happens when it’s done well.  I spoke about this 13 months ago in Brussels – I critiqued some multilateral organizations:

Sleepwalking elements of the international order must wake up.  Wishful thinking won’t restrain authoritarians in Caracas, or in Beijing, or in Tehran.

The meeting rooms of Washington and Brussels are a front line – a front line all their own.  Our citizens are trusting us to defend them – and to defend their liberties.  They deserve multilateralism that works.

On Sunday I’ll leave on a trip to the region.  It’s only fitting that my first stop will be in Bogota – the very city where the OAS charter was forged.  Our good friend, our ally Colombia – along with Brazil – has been a leader in this forum in holding the former Maduro regime accountable.   This week, Colombia will build on the good work we did in Buenos Aires last summer and another counterterrorism ministerial.  More than 20 nations have said, “Let’s take on the bad guys.”

I’ll then head off to Costa Rica, a great friend whose commitment to democracy has been clear for many decades, and we’ll discuss the crisis of authoritarianism right on its own border with Nicaragua.

I’ll then travel to Jamaica, a good friend of America.  My team told me that would be a really tough duty.  I’ll gather at an important meeting with many Caribbean leaders to discuss how we can all work together to promote our common democratic values and prosperity for all of our people.

I’m looking forward to a fantastic set of meetings.

I want to end here with a thought – a thought that recalls the roots of this body’s great work throughout time.

In 1948, the OAS adopted the American Declaration of the Rights and Duties of Man – the world’s first-ever international human rights declaration.  It was a major influence on the Universal Declaration of Human Rights that followed it.  The OAS document reads as follows.  It says:

“All men are born free and equal, in dignity and in rights, and, being endowed by nature with reason and conscience, they should conduct themselves as brothers one to another.”

Thank you for being with me this morning.